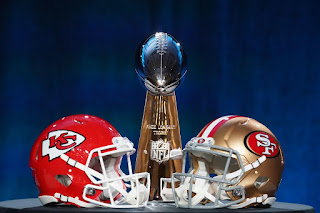 Every year since Super Bowl XL, I have used this blog for my "Stops To Super Bowl" list.  Every year, I create a list of smart, dumb, inane and chat worthy items for you to use in any banter leading up to and during the Super Bowl.
This year, it is 54 Stops to Super Bowl LIV and I'm back with some more (and some of the same) little items for you about the upcoming big game.

#54-NFL'S CHAMPIONS OVER 100 YEARS:  If you haven't heard, the NFL is celebrating its 100th season this year so it would be neat to look at some of the NFL champions over the years. This includes all NFL champs, including the pre-Super Bowl years.

*The Jaguars and Texans are the only current NFL franchises to have never played in an NFL championship game.
.

#53-MAHOMES IS YOUNG: Patrick Mahomes will be the 5th youngest quarterback to start a Super Bowl. Mahomes will be 24 years and 138 days old when he takes the field for Super Bowl LIV.
Dan Marino and Ben Roethlisberger were both 23 years old when they started Super Bowls. Neither had great games -- Marino's Dolphins were manhandled by the 49ers in Super Bowl XIX while Roethlisberger completed just 9 of 21 passes for 123 yards. Big Ben would actually win Super Bowl XL over the Seahawks with his controversial rushing touchdown coming up big.

David Woodley was 24 years old when he went 4-of-14 passing against the Redskins in Super Bowl XVII. He threw just five touchdowns for the Dolphins all season long heading into the game (it was the strike-shortened 1982 season) which led Miami to draft Marino the next spring.

The Rams' Jared Goff was 24 when he put up a stinker in Super Bowl LIII against the Patriots. This is quite an interesting list. Only one of the QBs younger than Mahomes would ever win a Super Bowl (Roethlisberger would win two) and two of them are or will be Hall of Famers (Roethlisberger, Marino).


Read more »
Brought to you by the Sportz Assassin at 12:56 PM No comments: Links to this post 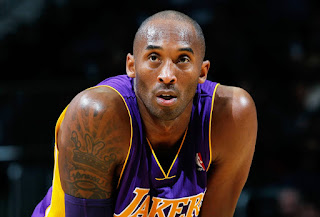 I am so stunned by what has happened that I cannot post some story biographical about it. Since you'll hear a lot about Kobe from news sources, fans and people who know him, I'll try to keep this to my favorite moments.

I've been a Lakers fan since I knew there was an NBA (early to mid 1980s) so Kobe is one of my favorite players of all time (likely second to Magic Johnson). My favorite in-person moment in sports was seeing Kobe Bryant hit a game winning shot with 0.3 seconds left to beat the Charlotte Hornets in 2002. I also saw him dump 58 points on the Charlotte Bobcats live a few years later.

Of course, I watched him win five NBA championships with the Lakers. He won them as the overconfident sidekick in 2000 and as the Black Mamba in 2010.

Again, you can find all kinds of places that will talk about his work ethic, his passion for the game, his legendary status and his outstanding start to his second act all over the internet and TV so I will spare regurgitating that here. You can see with the outpouring of emotion on and off basketball courts what Kobe Bryant meant to the world. I am shocked that his life was cut so short. I'm also gutted that three teenage girls had their lives end much, much, much, much too soon. I haven't felt this kind of sorrow in a very long time.

Brought to you by the Sportz Assassin at 3:42 PM No comments: Links to this post