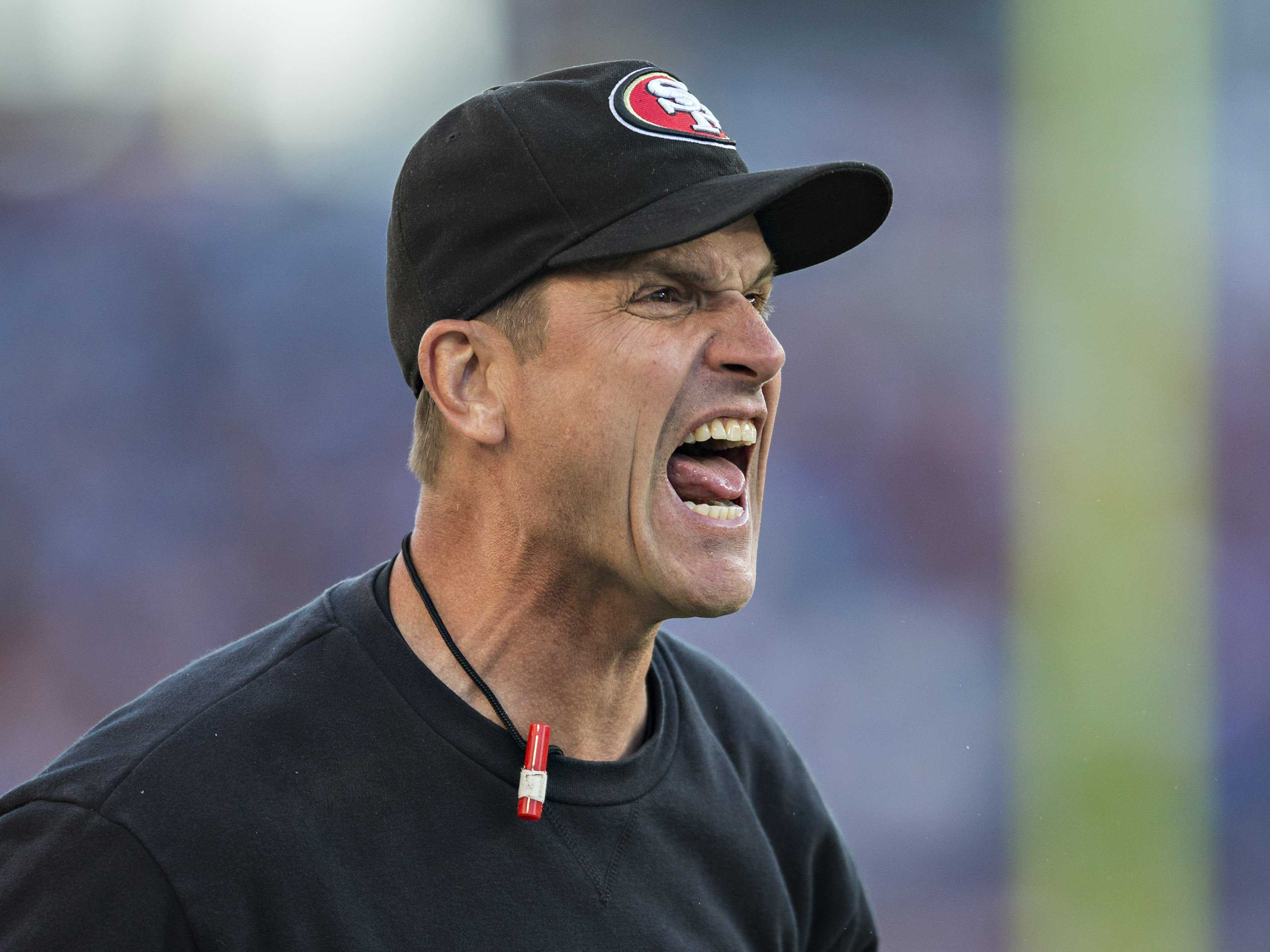 Black Monday in the NFL is the date, right after the end of the regular season, that sees coaches and general managers fired.  Some years, there is a huge chopping block.  Other years, it is rather calm.

To me, this will be one of those calmer years.  Sure, there will be firings, but not to the insane extent that we've seen before.  So who is on the hottest of seats?

Jim Harbaugh, 49ers:  This hasn't been a secret all year long.  Not only were there grumblings in September that Harbaugh had worn out his welcome, but the Niners would put up a disappointing 8-8 record.  With suitors in Oakland and Michigan waiting for him, he shouldn't be out of work long.

Rex Ryan, Jets:  Ryan has been barely holding onto this job the last two years and this horrid 4-12 season makes the decision so much easier.  Like Harbaugh, Ryan will land on his feet somewhere.

Marc Trestman, Bears:  Chicago shockingly took the Dumpster Fire Award away from the Redskins this season, and that's not an award you want to win.  That franchise is a mess.  The once proud defense is in shambles and an offense filled with playmakers looked pedestrian.

Mike Smith, Falcons:  Smith has been one of the most successful coaches in Falcons history and was Coach Of The Year in 2008.  But his history of poor game management and the team's shocking fall into the abyss makes it where Atlanta must move on.  With your job on the line, it doesn't help to get spanked at home by a division rival in a winner-take-all game.

Tony Sparano, Raiders:  This comes with a caveat.  Sparano is an interim coach and Oakland will replace him if they feel they can find a better coach.  However, there is some sentiment in the organization that Sparano has the team on track and could retain the job if no big name wants the gig.

Read more »
Brought to you by the Sportz Assassin at 10:00 PM No comments: Links to this post

Comparing Players Can Be Fun ... But It's Useless

Sports, by nature, is competition.  Teams and athletes compete to see who is better.  In most cases, we get a winner and a loser.  In a world filled with gray, sports is pretty black and white.

When we start comparing players off the field, we get into a tough debate.  While it is usually fun to say this person is better than that one, it is just wasted time and energy.  Sometimes it can distract everyone from the greatness of both.

Kobe Bryant just passed Michael Jordan in career scoring.  That fact re-opened a decade-plus long debate about who is better.  To most, Jordan easily bests Bryant.  He won more titles, didn't lose any Finals, won more MVPs, more scoring titles, more efficient and was a better teammate.  Ah, but Kobe fans can say that he went to more Finals, was a better shooter, hit more game-winners and dumped 81 points in a game.  And the argument begins.

Read more »
Brought to you by the Sportz Assassin at 11:22 PM No comments: Links to this post

I'm seeding according to the AP rankings.

Here would be the television schedule:


Brought to you by the Sportz Assassin at 11:11 PM No comments: Links to this post

The biggest loser on college football's Selection Sunday was the Big 12 Conference.  Baylor and TCU tied for champions of the league and both were the first two teams out of the Final Four.  TCU had the committee's love last week but Baylor owned the tiebreaker.  The Big 12 commish didn't do his league any favors by wavering on declaring a champion since Baylor was the champ but declaring that meant possibly screwing TCU out of playoff berth.

Turns out neither is going.

Look, when there is a four team playoff and five "big time" conferences, someone gets left out.  The Big 12 feels that being to lone conference of those five that doesn't hold a championship game hurt them.  They may be right.  Not only was the declaration of a champion muddled a bit, but it cost the league a showcase for their best teams.

Alabama played Missouri, Florida State beat Georgia Tech, Ohio State stomped Wisconsin and Oregon blew out Arizona.  Those losing teams were all ranked.  Alabama, FSU, Ohio State and Oregon are in the playoff while TCU, who blew out lowly Iowa State, is not.

The Big 12 is licking its wounds and is looking to change this from happening again.  Right at the very top of the list is expanding from 10 to 12 teams, which would enable them to have a championship game.

So who could they go after to get to those 12 teams?  Let's take a look at the candidates:

Read more »
Brought to you by the Sportz Assassin at 10:43 PM 3 comments: Links to this post

Forget that College Playoff Rankings crap. I like my postseason better.

I've done this for a few years now. My playoff is 12 teams where the champs of the big six conferences are automatically in, the top ranked champion from one of the other conferences and then five at-large bids (no more than three teams from one conference allowed). I seeded them by using the now-defunct BCS standings.

With the new way of college football, there is no BCS standings (I'm using a variation of that for this exercise) and there are now a big five conferences and not six. So, we will use the champs from those five leagues, the top champ from a non-five league and then six at-large bids.

And here is what I got:

What is interesting is that this weekend we will see Wisconsin play Ohio State, Arizona facing Oregon and Baylor hosting Kansas State ... meaning there will be a ton of movement among the playoff seedings before my final playoff bracket.  Plus if Missouri upsets Alabama, the Tigers will then qualify for a playoff spot and most likely knock Mississippi State or one of the losers of the aforementioned games out of the postseason.

Brought to you by the Sportz Assassin at 9:27 AM No comments: Links to this post