Tonight is the NBA Draft and four Tar Heels figure to be selected in the first round ... probably all in the top 20 selections.

So as someone who has watched virtually every second of every one of their games over the past four seasons, what kind of NBA players and careers will each of these guys have?

HARRISON BARNES:  A lock to be a top ten pick and could be a top five guy.  He could be one of those cats that has a better pro career than college one.  He is a nice shooter who can hit both the three and has a great mid-range game.  He is deceptively quick and athletic and has the ability to be a very good defensive player.  He struggles to create his own shot and he's not a great ballhandler.  I see a lot of Ray Allen in him, provided he gets some handle.

Barnes would be at his best on a team where he has a point guard who is adept at setting up his teammates.  When Kendall Marshall took over the lead guard spot for the Tar Heels in the middle of their freshman season, Barnes exploded.  He is great at getting to his spot, using screens as well as owning a nice one dribble jumper.  I think he'll have a long career just on his shooting alone and could have an All Star or two in him if he gets his ballhanding down.

The ideal situation in this draft?  Cleveland.  The Cavs have Kyrie Irving (yeah, a Dookie) who Barnes already has a friendship with as they both were in the class of 2010.  Washington wouldn't be a really bad spot since they do have John Wall.  He could fall to Golden State or Toronto which wouldn't be bad, but, to me, the Cavs are his best spot.

JOHN HENSON:  A shot blocker, rebounder who has a little jump hook and a spot up jumper.  Lengthy.  He is rail thin and will get bumped around quite a bit and will probably find himself in foul trouble on the next level.  He's also a horrible free throw shooter and tends to get too emotional on both ends of the spectrum.  His career could look a lot like other former Tar Heels Ed Davis and Branden Wright.

Henson is a better shot blocker than Davis and a better spot up shooter than either of them.  The fact he can hit that 12-15 footer adds some value to him.  But he doesn't have a position.  He won't be a guy that you can run any offense for.

Henson needs to go to a team that already has a post scorer ... whether that is a power forward or center.  He can come in and be the defensive presence who can create space by hitting those mid-range jumpers.  To me, his career will probably be as a 7th or 8th man who comes in with the second team to provide defense

He would do great in Sacramento alongside DeMarcus Cousins, though the Kings won't draft him that high.  Detroit seems to be the team that wants him and he'd do well alongside Greg Monroe.  Portland could use him alongside LaMarcus Aldridge.  If he dropped a bit, Dallas wouldn't be a bad landing spot.

TYLER ZELLER:  Of all these guys ... pretty much of anyone in the entire draft ... you know what you are going to get with Zeller.  He's a quick, fast center who can block some shots, hit jumpers, has post moves and gets to the line (where he can hit his free throws).  Usually known entities scare GMs because they lack the sex appeal of potential.

Zeller will be a smart backup big man on the NBA level.  He can pretty much fit in anywhere because of this.  That makes it hard to project who will select him.  Possibly those teams I had previously mentioned with Henson.  My dream would be for him to go to Phoenix where they love to run the floor.  That would play into Z's strengths.

KENDALL MARSHALL:  Marshall is the one of the four that will most likely fall out of the lottery and could fall towards the end of the first round.  Funny, since he showed in the NCAA Tournament that he was the most valuable of the quartet.

Marshall is a great passer.  A great playmaker.  Efficient and doesn't commit turnovers.  Towards the end of the season, his offense really took off and his shot started to fall.  He is a leader on and off the floor.

He also won't be able to defend any of the top point guards on the next level.  He is slow by their standards and will find it difficult to beat his man.  To me, he would serve best as a backup point guard who can direct the second team and face off against second-string point guards.

His best bet would be to fall all the way to 28th and the Oklahoma City Thunder.  They could really use his passing ability since this was one of the worst passing teams in the league in terms of assists (they also committed tons of turnovers).  He could come in as the Derek Fisher role and slide Westbrook to the two-guard (though Marshall could guard the other team's two).  He'd be great at deciding who gets the ball and where they should get it ... as his role at Carolina forced him to do the exact same thing.

If not OKC, then any of those playoff teams would work.  Indiana would work great with all those shooters.  Same for Atlanta.  In Dallas, he could back up Jason Kidd or Deron Williams (if he gets there).  In any case, he'll be a change of pace kind of guy.

Zeller isn't big, isn't strong, isn't a dominating low post scorer.  He's smart, has great hands and can sprint end-to-end with any big man.
Brought to you by the Sportz Assassin at 12:02 PM No comments: Links to this post

Why Everyone Will Be Watching This Thunder-Heat Finals 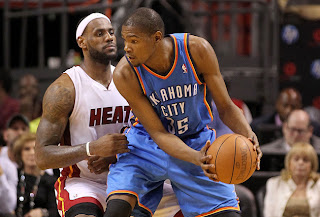 Whether you like it or not, the Miami Heat will face off against the Oklahoma City Thunder in the NBA Finals.  This should be quite a big ratings bonanza for ABC/ESPN.  Why?

No. 1 - BOTH TEAMS ARE GREAT:  In an age of mediocrity all over the league and the teams who were among the best (Lakers, Spurs, Celtics, Mavericks) aging, these are two teams who are both young and great.  Both have their Big Threes.  Both have personality.  And we may be watching what could be the next Lakers-Celtics rivalry.

I mean, we will get that great Kendrick Perkins-Udonis Haslem matchup.  Uh, wait.  No, I think any of the other four matchups will be pretty cool.  Ibaka-Bosh?  Sefalosha-Wade?  Westbrook-Chalmers?  Ahhhhhhh.  Kevin Durant vs LeBron James.  Yeah, that could be good.

No. 2 - SCORING:  Maybe these two aren't the highest scoring teams, they both know how to do it.  This series will feature 3 of the top 5 scorers in the NBA during the regular season (Kevin Durant, LeBron James and Russell Westbrook).  If it wasn't for all those missed games that caused his scoring average not to qualify, Dwyane Wade's 26.4 ppg would have placed him 4th ... meaning 4 of the NBA's top 6 scorers are in this series.  What that means is we have four guys that at any moment take over any game.  We've seen all four of these guys do that at some point during this postseason.

Add in James Harden and Chris Bosh, and you've got two more cats that can light up a scoreboard.

No. 3 - HATING THE HEAT:  Contrary to what people say or think, sports hate parity.  Yes, it is great for the fanbases to watch their team have a chance to win, but it works a lot better when there is a team that everyone hates ... and that team is good.  The Yankees, Cowboys and Lakers all give off that flavor as do the Patriots, Red Sox and ... yes ... the Heat.  If the Thunder assume control of this series, all the Heat haters will make sure to watch the knife go into their heart.

No. 4 - LEBRON JAMES:  No matter where on the spectrum you lie, you have a feeling about LeBron.  You love him, you hate him, you feel sorry for him, you laugh at his struggles, you think he's great but he should be greater, you are tired of all the hype.  No matter what happens, the lead story is LeBron.  His quest for his first championship will be scrutinized whether he wins or loses.  If he wins, was it he that led them or did he just do his thing?  Was he clutch?  Was he everything he should be as a champion?  If they lose ... well you know the deal.

No. 5 - OTHER HATED PLAYERS:  Maybe they aren't as hated, but guys like Wade, Harden, Mario Chalmers, Kendrick Perkins and Westbrook have their own haters.

No. 6 - KEVIN DURANT:  He is the anti-LeBron to many people.  A guy whose greatness hasn't gone to his head.  A guy who doesn't want to leave his small market and believes he can win a title just where he is.  A guy who does gloat about his greatness.  A guy who could be on the track to a multi-championship career.

No. 7 - SUPER DUPER STARS FIGHTING FOR A TITLE:  The main event is LeBron vs Durant for their first title.  We really haven't seen anything like this in quite a while.  I'd have to go back to 1980 to even approach this.  Magic Johnson going up against Dr J's Sixers.  Sure, Kareem Abdul-Jabbar had won a title in Milwaukee in 1971 (like Wade won one in 2006), but history recalls this series as the one where Magic came up big for an injured Kareem and driving home a title.  Magic could play the role of Durant, LeBron the role of Dr. J who previously lost in the Finals yet looking for his first title.

You could also look at 1977 when the young Portland Trail Blazers led by Bill Walton snuck into the Finals and took on that loaded Sixers squad.

Or you could say the 2006 Finals with Wade vs Dirk (aka Heat-Mavericks).

No. 8 - OKLAHOMA CITY FANS:  Of course those OKC fans are rabid.  There are a one horse town (meaning one pro team) that still have that new car smell.  Charlotte was the same during the Hornets era of Larry Johnson and Alonzo Mourning.  So was the Sacramento Kings in the early 2000s.  There are few crowds in sports where you can feel the arena through the television.  OKC is one of them, just as the Cameron Crazies, Red Sox, Yankees, Raiders and Saints are.

Still, you have to feel bad for Seattle.

No. 9 - WHAT ELSE ARE YOU GOING TO DO?  The Stanley Cup will be decided in the next few days.  Baseball is in its dog days.  Your stuck in the middle of your fall shows ending and those summer ones starting up.  The Euro 2012 soccer tournament is played during the daytime hours.  All the Olympic stuff heats up in a few months.  Might as well watch the Finals.

No. 10 - NO CALIFORNIA OR TEXAS:  Low blow, but this will be the first Finals since 1998 that won't be held in either California or Texas.  The Lakers, Spurs or Mavericks have been in every Finals since the Chicago Bulls beat the Utah Jazz for the second straight time.

Brought to you by the Sportz Assassin at 10:12 PM No comments: Links to this post