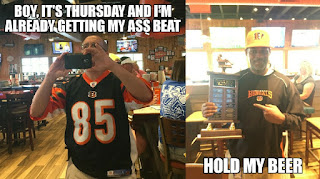 Brought to you by the Sportz Assassin at 5:48 PM No comments: Links to this post

Do we need to change how we judge boxing matches?

I am 42 years old and grew up with those great boxing matches of the 1980s, 1990s and early 2000s and was born just as the era of great 1970s fighters. I loved boxing. Still love boxing. No matter how much it still tries to hurt me.

In the last few months, boxing continues to tempt me only to let me down. First was the Pacquiao-Horn fight which somehow ended with Horn winning a decision. Next came the spectacle of Mayweather-McGregor which was less about boxing as it was about showmanship. Then came the fight I really craved: Alvarez-GGG. While that was worth the wait and the fight I enjoyed, it ended with controversy as one judge somehow saw Alvarez win 10 rounds despite the other two judges combined only seeing him win 11.

There is also a less heralded controversy of the Burnett-Haskins fight that saw one judge mixing up which fighter was which and his scorecard was completely messed up.

It hurts. It hurts that the sport that I loved growing up trying so hard to shoot itself in the foot. The fact that I still get so hyped up heading into the mega-fight nights means it still has that kind of pull for me but the fact that it is still screwing me around means it hasn't learned how to act mature. Remember, I lived through bitten ears, fan man and grown men quitting at the beginning of bouts.

But it is judges like the ones in the Horn fight and Adalaide Byrd of the Alvarez-Golovkin bout that makes me cringe. So much so that there may be a need to change the way we score these things.

Go back to the old days where there was no 10-point must system. If a fighter wins the round, then the round goes in his column. At the end of the fight, see who won more rounds. Simple? It keeps that point deduction after knockdowns off the board (do we really need that? I mean, isn't the fact you got knocked down a contributing factor to why you lost that round?) and makes the scoring simpler. It also keeps that oddity of a 10-10 round from happening.

The one drawback I see is if a point deduction is warranted. Say for low blows, head butts or any other fouls that happen during a fight.

The Olympics used a new scoring system similar to what professional boxing uses in the 10-point system. There, you have five judges who give the winner of each round 10 points and the round's "loser" can be given points in comparison to how they performed. For instance, a close round would be scored 10-9 with a round that was dominant by one fighter being, say, 10-7. Now, the catch is that each round a computer randomly selects three judges' cards to count.

In professional boxing, this would be changed up a little to accommodate a 12-round bout ... but would it really help? What if the computer randomly collects the data from the wayward judge instead of the impartial judge? Also, scoring a round 10-7 could really skew the scoring of a fight where an opponent may never recover, even if he actually does in the bout. It may not be as perfect as it seems, at least in a pro setting.

Maybe just have the five judges and keep all five scores. That way, a wayward scorecard doesn't drastically effect the outcome like it did last Saturday.

SCORE THE FIGHT, NOT THE ROUNDS

One out there way is to score the fight as the whole and not the rounds. For purists, this may not totally fly as judges are supposed to judge each round as its own entity without letting anything leading up to that round influencing their decision. Just because one fighter was pummeling the other in Round 5 doesn't mean a close Round 6 should go to the guy who has been previously in command.

Some do feel that judges should judge the fight at the end and just declare one the victor. What if Byrd scored the Alvarez-Golovkin fight 115-113 for Alvarez instead of 118-110? Even though the result would be the same (a draw) her scorecard wouldn't be as criticized. You can't tell me there weren't many people who may have felt that Alvarez won 7 rounds of that fight. Hell, that's just one more round than what one judge scored (114-114) and two more than the other (113-115). So what if it was Byrd saying that Alvarez won instead of the score? A bit better. It would also force the judge who scored it a draw to pick a winner instead of a tie.

Of course, this could also fall under corruption as there would be no guide to why a judge felt someone one a fight. Even with Byrd's ridiculous scorecard, she must have felt that Alvarez was clearly dominating all those rounds and we see that. With just a vote for Alvarez, we may never know how she saw the fight.

This idea gets a lot of run. I mean, what if at the end of an NBA game, we finally decide to count up all the points the teams scored and finally tell them who had more? Dumb, right? So why do we do it in boxing? Why don't fighters know where the fight is at as it is being scored.

Take the Pacquaio-Horn fight. There is no way that Manny felt he was trailing on any scorecard heading into the last couple of rounds. So the fighter did what most would have done: play defensively and make sure he did nothing stupid to get knocked out. Even Alvarez, who perceived he was trailing late in his fight with GGG, started upping the desperation factor late in the fight and it paid off as it caused a draw. If Pacquaio knew there was behind on the scorecard then he may have fought those final rounds differently.  Maybe have the scoring revealed after every round; maybe after every other round; maybe after rounds 4 and 8. But have something that we all can look at and know where everyone stands.

Now, you can say it could cause an opposite effect. What if a fighter looks up and knows he's up big going into the final rounds? Would he just dodge the fight and run away from any action to keep from a knock out? Would the end of fights become dull and turn into garbage time and just running out the clock like we see in football or basketball? Maybe, but it would also make the trailing fighter more aware of his place in a fight during the bout and act accordingly. If he is trailing in the middle rounds, would a fighter step up his game to even it up? It could go any way but it certainly couldn't make for worse fights than what we have now.

And the other intended consequence is it holds judges accountable during the fight ... sort of. If, as we are watching, we are seeing rogue scoring than it forces us to take notice and certainly would the fighters. It wouldn't give us the "what the hell" shock it did on Saturday. If Golovkin even had an inkling of Byrd's scorecard, he would have attempted to close out the fight a bit stronger than he did and we have avoided this mess.

My biggest drawback of this is I wouldn't want the other judges to influence one judges card. Meaning, I wouldn't like it if a judge was legitimately scoring the fight objectively but looks up, sees their card isn't like the other two judges and starts to lean it back to a popular opinion rather than what they were seeing. Like I said, if Byrd really thought Alvarez won, I can't really lambaste her. It was the actual score that people don't understand.

Well, seeing how that works on things more important than a boxing match, I rather not.

Most people will rather things stay the same either by habit or just because it may be the best. To some, it is all about the judges and a corrupt or inept judge will damage the scoring one way or another no matter what system is used. Maybe the best way is to create one school of thought for judges and really reward those great judges to these top level fights. Even so, Byrd had judged over 100 title fights so it wasn't like this was her first rodeo on this stage. Maybe there just is no way to truly get this right.
Brought to you by the Sportz Assassin at 1:15 PM No comments: Links to this post